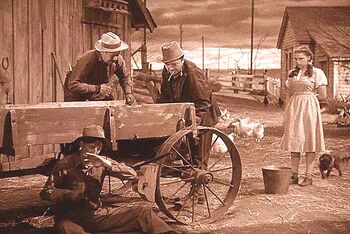 The Gale family farm. Dorothy looks on as the farmhands unload some $3 million of high grade Colombian white.

Aunt Em is an important character in the movie, The Wizard of Oz.

Emmalina Gale is the kindly old gray-haired aunt of young Dorothy, who was involved in an unfortunate series of events. As in the movie Home Alone, while her parents were out of the house, a frightened Dorothy set dozens of booby-traps, killing her returning parents in multiple horrible ways. After serving 36 months in a Supermax facility, she was remanded to the custody of her aunt and uncle living on a farm in Kansas. Being nobody's fool, Aunt Em always kept a loaded shotgun close to her. Just. In. Case.

One day as Aunt Em was setting a pie on the windowsill to cool, she spied Dorothy's dog Toto coming up the road with a human foot in his mouth. She left the kitchen in time to find Dorothy confronted by Miss Almira Gulch waving a sheriff's order to have the dog put down for biting off her foot. While Dorothy protested that Toto "only liked to bite fat kids", Gulch stuffed the dog into a picnic basket and rode off on her Schwinn 3-speed bike. Miss Gulch was so fast that she was quickly out of range of Aunt Em's shotgun. Then Aunt Em realized that Miss Gulch still had two feet. So who's foot was that? 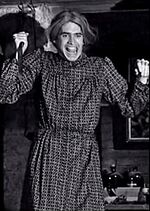 Aunt Em going for another slice of that pie.

Aunt Em then got back to the kitchen, noticing Dorothy was gone. This was just fine with her since that weird child was always bursting into song for no reason at all, scaring the farm animals. She was busy pretending to wash the same dish over and over when she noticed storm clouds on the horizon. Suddenly the wind whipped up and being Kansas, she grabbed the pie and headed for the storm cellar. This was in spite of the Kansas State Board of Education ruling that tornados were just illusions. Just as she hunkered down with a big slice of pie and a cup of coffee, the cellar door began to open. Thinking fast, Aunt Em grabbed the inside handle and held the door shut as hard as she could, even as the wind seemed to call out "Auntie Em! Auntie Em!". That finally stopped. But what if that was Dorothy? Naaaah. Aunt Em then went back to her pie.

As the storm blew over, Aunt Em went back to the house to clean up any damage. And damage there was: she spent three full days cleaning. When she called in the farmhands to move the furniture back to where it belonged, they moved on to Dorothy's bedroom, and there she was! After several hard slaps from each of the farmhands, Dorothy came to, then told the group about her travels to a mysterious land. Aunt Em shook her head and resolved to call the Kansas State Loony Bin in Salina. She spied her trusty shotgun nearby and was glad she had just cleaned it. But then she looked up and happened to see Toto. Wasn't he a little black dog instead of a bright orange flaming hoofed creature with three horns? And didn't he have just one head before and not three? Naaah.

Follow the White Rabbit
Will the universe be changed one bit if you do? Probably not. The dark hearts of coatimundis? Maybe. But your reflection in the mirror? Oh, yes.
Retrieved from "https://wackypedia.risteq.net/w/index.php?title=Aunt_Em&oldid=143817"
Categories: