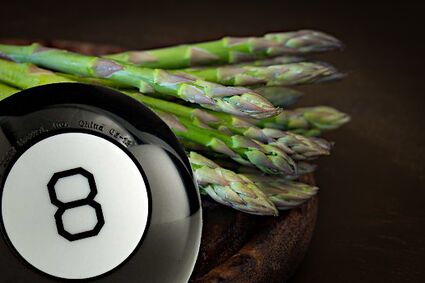 Which one does a better job of predicting the future?

After the British press trumpeted that 'major happenings were predicted for 2021, Asparamancy became the word on everyone's lips. Naturally, Chapstick can help with that sort of thing.

Asparamancy is the prediction of the future using asparagus. There is but one practitioner, Jemima Packlington, in the whole of the United Kingdom, located in the tiny village of Bath, lying just beyond the more famous village of St. Loony Up the Creambun and Jam. Probably not coincidentally, the asparamancer lives just a few doors down from England's Witchfinder General, no doubt keeping a sharp eye on proceedings down the road.

The process is very simple. Asparagus is tossed in the air and the patterns are interpreted to predict the future. Whether this is Sainsbury's or Asda asparagus and whether the veg is used raw or lightly blanched after trimming remains shrouded in mystery. Whatever the case, it certainly is a much neater process than American Indians' hollowing out a porcupine and using the dried blood inside as a mirror to see into the future. It also beats the Greeks using the entrails of animals for prophecy despite their love of tripe for Sunday brunches. On the other hand, The Asparamancer of Bath tried broccoli earlier but failed to get any meaningful answers.

In the past, asparamancy has correctly predicted:

Current predictions at the beginning of 2021 included: