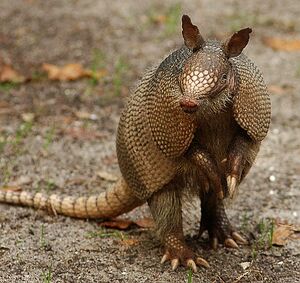 Armadillo searching for that leg waxing place it heard about.

An armadillo is the platypus of the Americas. A mammal with armor? Where in the world did that come from?

Well, South America is where. They are thought to be descended from giant armored critters in a place where the predators all probably had chipped teeth. The nine-banded armadillo, the official state bird of Texas, has been found traveling farther and farther north, like Illinois north. It's either due to global warming or following killer bees; who can say. And with that built-in armor, armadillos automatically become paladins in Dungeons & Dragons. Live with it. Of course, if there is any trouble while going through tunnels, the armadillo can dig itself a new tunnel in a flash, leaving you to deal with a grue or something.

Armadillos can cross water while holding their breath and walking across the bottom of a pond or stream, or can pump themselves up with air and float. I spit you not. If you're short on tub or pool toys, think armadillos. They do carry leprosy, however, so hold that thought unless the armadillo has its health papers handy.

With all these great abilities, why haven't armadillos taken over from puny humans? For one, they only like jungles and deserts, and will live in more temperate places. But put an armadillo next to your wife, girlfriend and/or mother in a 68°F (20°C) room, and the first one to say "Isn't a little cold in here?" will be the armadillo. Still, if and when armadillos make it to L.L. Bean in Maine in the summer and buy some warm coats for winter, watch out. Meanwhile armadillos also unfortunately stop and stand up to see what's making a noise, not a good idea when crossing a highway. So they are also the official state roadkill of Texas. Now if they ever catch on as Uber or Lyft drivers, watch out. It'll be Thelma and Louise or Vanishing Point time, if you get my drift.