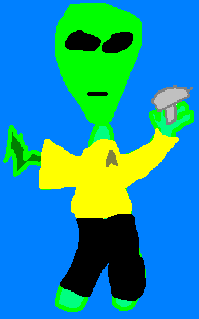 Area 51 is the Alien Embassy on the Planet Earth. Having already established two on the sun, and thirteen on other planets in the Solar system, the aliens decided to put one on Earth for temporary home.

Area 51 was made by aliens, duh! No wonder they live there and only certain military leaders can go in and talk to them. The aliens were inspired after they watched Star Trek. They thought it would be cool to make Star Fleet Command Base in an empty desert, therefore making Las Vegas. One alien stole Captain Kirk's uniform and then was raped by a yak in China. Another Alien stole his phaser and shot JFK. Then they felt like making a doctor's office where they would get physicals and stuff but then the Military took it over and called them selves "doctors" so they could test the aliens.

The government calls it a military based used to test aircraft, but everyone knows that is bullshit. The government is so stupid to try to cover up all of the stuff we know is going on in there. Stupid government. We all know that aliens chill their and abandoned Las Vegas because there were too many lights for there twelve eyes and went to Area 51

Inside Area 51 are cool things like lights and test tubes and old rotting alien carcasses that scientists are studying. Cool alien things, like spaceships and flying saucers and stuff. Not to mention the stockpile of gold and Platinum in the Bathroom.

In there also is a shitload of aliens and an alien nightclub where they party all night! Oh yeah! There is also an indoor ski slope, a shopping mall, a bar, a corner deli, and a complex city underground made entirely of caves that has electricity and water supply that will last a long time. The Aliens call Area 51 ZwAWyeHStTTdG, or ╫╓╣╕╢┤╡╜╗║ in their writing. Boy are those aliens cool! They like to drink beer and egg nog and are always green.

Stuff that Happens in Area 51[edit]

Everyone knows that alien ships are parked in the Hangar in Area 51. The place is like a garage and a gas station for aliens who are flying to the sun and Neptune and stuff. Area 51 is also an awesome hang out for aliens, but not as cool as the one on Venus.

Scientists are always cutting open aliens with scalpels and stuff and take notes of their livers and stuff. they also trade cigarettes for alien technology brecause the aliens like to smoke pot.

Many Aliens come there, sadly, however, none from LB-426. Then they would eat everyone and the planet would a-splode from the inside because all of the aliens would eat trees.