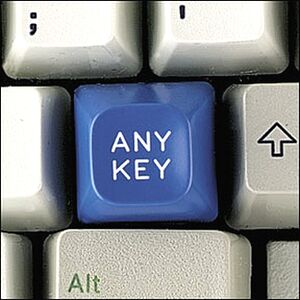 There it was, all along.

The command press any key to continue has caused confusion and distress over the years in the computing world.

This is a corruption of the name of Annie Key, a direct descendent of Francis Scott Key. Since she was responsible for monitoring printers and changing rolls of green bar paper at IBM, she would sometimes fall asleep while waiting for a box of paper to run out. Her bosses instructed her colleagues to make sure Key did her job, telling them to "pressure Annie Key to continue" as a reminder. This eventually morphed into the video screen command that was so familiar to programmers that are geezers today.

Meanwhile, Apple found its users panicking when asked to hit any key, since they were unable to understand the words "press", "any", "key", "to" or "continue". This would also cause problems when Apple users would run to nearby music stores to press a piano key, running down old ladies and crashing through glass windows. Naturally, Apple booby-trapped their keyboards to insure developers would never use this message, preferring to injure their dumber users on their own terms.