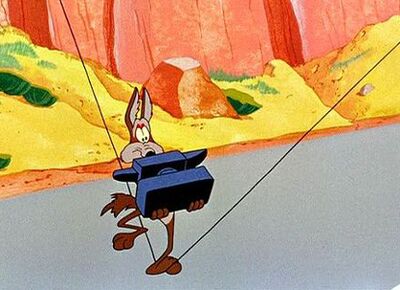 An Anvil was once an important part of any blacksmith shop.

With few blacksmiths left, only the multinational corporation Acme survived, now a subsidiary of Nestlé. With Acme's permanent government subsidy, something had to be done to increase anvil consumption.

The US government distributed anvils to desert carnivores along with food stamps, hoping to encourage them to pick up the blacksmith trade and clean up all the abandoned cars in the desert. Instead, they used anvils for all kinds of other purposes including using them for props in mime routines. This program was stopped in 1961. Anvils were then weaponized, used as bombs in the Vietnam War. Unfortunately, its odd shape prevented accurate bombing (which was never the point) despite desert testing showing they landed on coyotes 100% of the time.

Since Acme's industrial capacity was needed in 2002 for adding microplastic particles to water bottled by Nestlé, anvil production ceased completely. This still left millions of unused anvils, which were given away to anyone who wanted one. It was assumed canners and scroungers would take them away to be recycled. Instead, children from housing projects would lug them to building roofs and drop them on unsuspecting people and coyotes. A few anvils would be made into hipster earrings, with minimal popularity.

For those without comedic tastes, the so-called experts at Wikipedia have an article about Anvil, or simply go here.