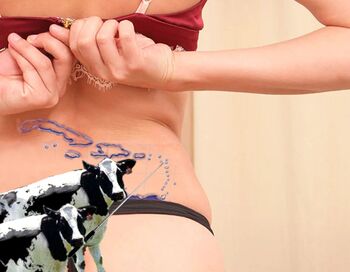 The GeoCow twins correctly identify the location of Antigua and Barbuda on the Caribbean tramp stamp. Ten points to Gryffindor.

Antigua and Barbuda. Fred and Ethel. Laurel and Hardy. Frick and Frack. Those pairs have such a nice ring to them. There's nothing better than two islands in the Caribbean that get along together so well. Happy families and all that.

The rest of the Caribbean island nations needs to follow their example and join up. Certainly, there are more similarities than differences. The name would have to be an acronym since it would be too long to fit on this page. Atlantis would be a cracker of a name, too.

With the saving in administrative costs, they could then afford some kind of real army and navy, one of real size and power. A few bombs and missiles bought from the usual suspects or from eBay and then it's off to invade, say, Texas. Caribbean types could really use that oil and gas. Certainly the rest of the US wouldn't mind losing Texas if they still got their share of petroleum products. In return, the Caribbean islands would bring some of that island mellowness. Texas definitely can use a big dose of that. And they could install some storm drains and electrical towers that cheapskate Texas still refuses to build because the Federal government never fails to bail them out. Plus fake Country music replaced by reggae can only be a good thing in itself.