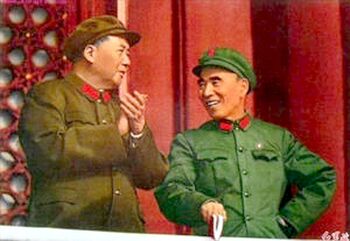 Ann Coulter is an ultraconservative spokesperson for herself.

God, Buddha or whatever passes for The Powers That Be today thought it would be a good joke if radical Chinese leader Lin Biao was was reincarnated as a right winger as punishment. The result was Ann Coulter. She is as strident a fanatic as Lin Biao ever was, not realizing that a person she would regard as a dirty Commie was once her. She uses big words and talks a lot, just like Lin Biao did. And like Lin Biao, she is plotting against the party leadership so that she can take control before they send her back to her Martha Stewart kitchen where any good Stepford Wife should be.

For those without comedic tastes, the so-called experts at Wikipedia have an article about Ann Coulter, or simply go here.
Retrieved from "https://wackypedia.risteq.net/w/index.php?title=Ann_Coulter&oldid=125671"
Categories: