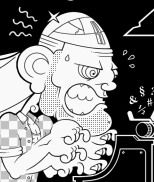 The Origins of The Nerd[edit]

The Angry Video Game Nerd was born in New Jersey and he got a Nintendo for his birthday. It also contained a game called "Super Mario Brothers" and he played that game all day, but there was one area where he got stuck on and that's when the frustration began....

From Nintendo to Video Game[edit]

The Angry Video Game Nerd was once known as the Angry Nintendo Nerd. This was when he would play very frustrating games made by Nintendo.

This would change after he reviewed "Rocky" on Sega and by that time, he was called the Angry Video Game Nerd. Today, he reviews many video games and their consoles to proove how much some people cared less...or not at all!

In 2008, The Nostalgia Critic said that he was acting TOO much like the Nerd, but this was all false since The Critic reviewed movies and TV Series more than Video Games, but nonetheless The Nerd challenged The Critic in a fight which was seen of WWE as a Pay-Per-View.

The Angry Video Game Nerd has made-up a character called Shitpickle which was a pickle with...what else? He would have odd adventures and Sjitpickle would also worship the Super Mecha Death Christ 2000 BC 4.0 Beta which is one of the many forms of Christ according to Jehovah's Witnesses.