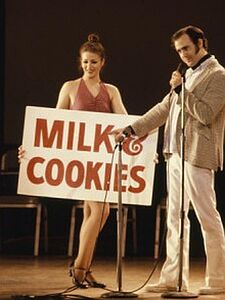 Proof of Andy Kaufman's alien origins. Here, he does not understand the concept of subliminal suggestion to influence an audience of gullible humans.

Andy Kaufman was a supposed comedian known for his strangeness.

In reality, he was a space alien from the planet Nibiru. Sent to study Earth in order to set up an invasion, he went forward in time and happened across several wikis including this one. This unhinged his inhuman mind, accounting for the different characters he played while on Earth. While on television to present his case for Earth's surrender, he led his speech off with a strange joke that got laughs. He then became a comedian to try to subliminally control the human race, with mixed results (see photo). That he jumped from one theme to another constantly just proves Kaufman was reworking wiki articles that did not fit together.

This is not to say that he did not exert influence on Earth. He was able to enter the mind of Jim Carrey for several years, so that Carrey was accused of demonic possession, not far from the truth. Carrey actually became Kaufman for a time, but was able to use a Monopoly game "Get out of jail free" card to break control.

Andy Kaufman has been reported dead for some time. But everyone knows better, including Elvis.