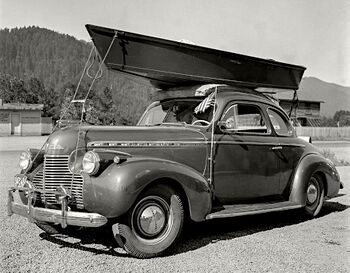 Now who wouldn't want an amphibious car? Forget paying bridge tolls forever. Plus, you can invade a foreign country in style with the top down so you can get a tan as you shoot your way onto a beach.

Now a lot of people think the amphibious car was invented by Jeremy Clarkson. But that was just him driving drunk into the water with a regular car. There were intentionally amphibious military vehicles well before then, but they were not popular because of the lack of color choices and their slow speed. Potential buyers did like the twin machine guns, though. Still, most of the ones that were available to the public were secondhand, shot full of holes or with weird sea creatures found living inside.

So, in 1962, the AmphiCar debuted. It was a cute little convertible that you could just drive into the water. It could only putt putt slowly in the water, unless some kids stole the propeller to play frisbee. So, it was difficult to escape angry swans and hungry ducks. It had a low freeboard, meaning it rode low in the water, and any splashing fish or surfers could swamp and drown you. The doors could not be opened while in water, but since Russian dashcam videos did not exist yet, this was not a concern.

Fast forward to the 21st Century and today you have your choice of amphibious cars. There are ones that cost a small fortune but can go 60 mph (100 kph) in the water. Terrorists and Somali pirates take note!