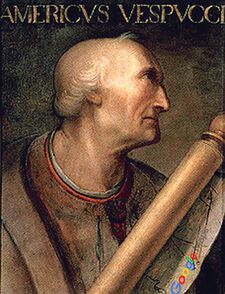 Amerigo Vespucci was definitely a Florentine merchant, probably an explorer and maybe a navigator.

All that is known about his travels is from letters that he supposedly wrote, since historians are fighting over which ones he actually wrote, if any. Booklets were written based on those letters detailing his travels in search of the perfect dill pickle, something that foodies are still seeking today. Even the number of his actual voyages to the New World is disputed since no original source letters have been found, as demonstrated by the lack of pickle juice stains on existing documents. There are also foobies in the booklets, one giving distance and directions so that he would have sailed far enough to reach the Pacific while crossing Mexico in a boat. Vespucci did supposedly realize that the New World was an entirely new continent based on cucumbers being different, whereas Columbus thought he was enslaving Chinese people all the time he was in the Caribbean.

He is often credited for being a navigator but was never noted as chief navigator. If "navigator" means you had a pet monkey that would sit at the bow of a ship and point, then Vespucci was a navigator. Plus, from expedition captain's reports, it is suspected that he spent all his time by the pool writing postcards to his friends back home, eating pickles.

For those without comedic tastes, the so-called experts at Wikipedia think they have an article about Amerigo whatshisname, or simply go here.

So how did America get its name instead of "Columbia" for Columbus or being named for the ancient mythical land of "SCKGJzhpR*fkq,d"? After all, his reputed voyages came after Columbus's. Robert Waldseemüller, mapmaker supreme, created his famous and relatively accurate world map in 1507 and put "America" on what is South America today. Authorities note that Waldseemüller might have written "Amerigo is a little pickle bitch" in Latin next to a picture of a cartoon pickle on his map. This was then mostly left out by the person who actually did the map engraving. Then other mapmakers followed since they were largely stealing from Waldseemüller. Rand McNally and Google Maps, we're looking at you. But why not Vespucciland? That name was thought to be suppressed by a cabal of pickle-hating Illuminati, Freemasons and space aliens.

Follow the White Rabbit
Will the universe be changed one bit if you do? Probably not. The curious songs of blue whales? Maybe. But your reflection in the mirror? Oh, yes.
Retrieved from "https://wackypedia.risteq.net/w/index.php?title=Amerigo_Vespucci&oldid=143710"
Categories: