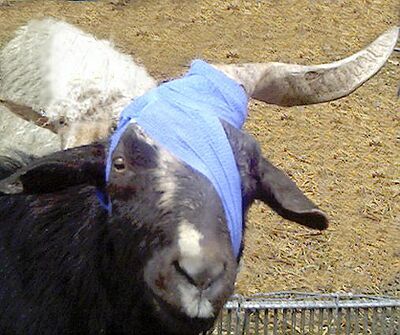 Amaltheia was Zeus's nursemaid when he was a baby.

Amaltheia was a goat, thrown by Zeus's mom Rhea into the same cave where Zeus was hidden as Zeus's father was big on eating his kids, for whatever reason. Luckily, she had chosen a female goat so that Zeus could be fed milk instead of dying from starvation. An adult Zeus would never admit to drinking goat's milk as a child; when asked about it, he would always respond, "Baaaaaaah."

At some point, little Zeus managed to break a horn from Amaltheia, creating the first unicorn. Rather than sending out for some glue from a 7-11, a remorseful Zeus took the broken horn and made it into the well-known cornucopia, the horn of plenty. Later on, Zeus turned Amaltheia into a constellation known as Frank Capra. This has insured that every time a bell rings, a goat gets its wings and gets changed into a bunch of stars.

For those without comedic tastes, the so-called experts at Wikipedia have an article about some smelly goat, or simply go here.
Retrieved from "https://wackypedia.risteq.net/w/index.php?title=Amaltheia&oldid=146512"
Categories: