Its intelligence was lower than other dinosaurs of the time, causing scientists to speculate that the individual they were studying may have been retarded, having a prominent mental illness.

An average Allosaur's diet would usually consist of giant, obese, long necked dinosaurs (known as Sauropods). Scientists have come across several bones which suggest and convince them that Allosaurus led a slacker life as a slob, rather than the energetic, body-builder of a hunter. These bones look suspiciously like chicken bones, scarred with heat marks, which probably means it was deep fried and accompanied by chips and coke. All this evidence suggests a hypothesis that most Allosaurs were free loaders, living off Kentucky fried chicken and may have had notorious binge drinking habits. 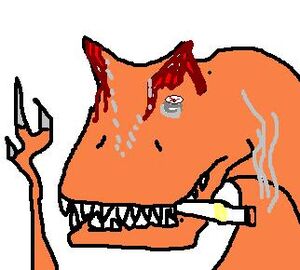 A scientist's best restoration of an Allosaur after a hard night

Allosaurus bones show that females were larger and more fearsome than males, so their social classes were probably female-dominated, with one leading the entire pack. Males had little purpose in the pack. The posture of Allosaurus, and all dinosaurs in general, has been debated heavily and constant disagreement shrouds everything. However recently, it has been found that the scientists who were debating over the issue lost track, and found themselves debating over the extremely controversial subject of the best milkshake flavour. After the ignorant, childish behaviour had been settled (eventually finding vanilla to be the victor) the debate finally returned to the original topic. Unfortunately, due to the failure to cooperate and the stubborn, anti-social and arrogant behaviour of debating council, there is still no accepted theory. Oh, and recent research into the leg muscles and condition of the brain case and teeth of Allosaurus has shown that Allosaurs were definitely party animals.

Allosaurus is reasonably famous but is often mistaken for a Tyrannosaurus by Stupid Smart-Ass children, drugged-up movie directors and ignorant journalists.

The dinosaur appears in numerous television shows and is portrayed badly in every one of them. In most films, such as '20 000 years BC', Allosaurus is shown harassing women.

The general public is ignorant when it comes to the massive scaly birds, and simply treats the subject as a kid's fairytale, compared to the fascist scientists who work all their life on the skin colour of a triceratops only to realise at the age of 57 that they'll never actually find out, thus committing suicide off Mussolini's balcony.