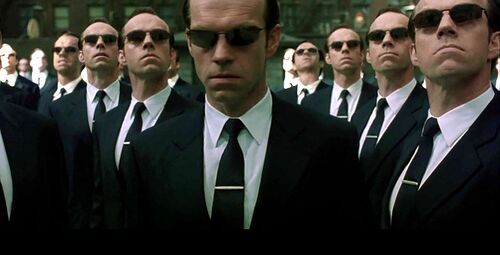 Agent Smith is a virtual personal assistant that went rogue.

Instead of tending to normal business, Agent Smith decided to harass everyone in the world alphabetically starting with some guy named Mr. Anderson vacationing in the Matrix. In virtual Hugo Weaving form, it would duke it out repeatedly with Mr. Anderson aka Neo instead of, say, electrocuting or at least pulling the plug on him. Agent Smith would continually ambush Neo in public bathroom stalls and in porno theaters. Worse, in league with Neo's cellphone, Agent Smith would pretend to be Siri and order tons of Tide Pods delivered to Neo's doorstep. Luckily for Neo, porch pirates would steal most of them but would be found dead on the sidewalk after taking the Tide Pod Challenge. Plus Agent Smith would pwn Neo by accepting takeout orders from restaurants that had been closed years before.

After complaints in the form of threatening dirt looks, Microsoft agreed to fix Agent Smith, who was actually a program. Just four years later, Microsoft rolled out Agent Smith 8.0 but immediately withdrew it since it tended to blow up servers running the Matrix, just slightly. It then withdrew Agent Smith as an app and redesigned it to convert bidets into drinking fountains.