From Wackypedia
(Redirected from Aeon Flux)
Jump to: navigation, search 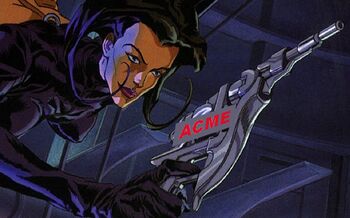 Æon Flux is an assassin and secret agent residing in the multiverse. It is debatable if she or James Bond is a worse agent.

She should consider herself lucky for being in the multiverse. While she doesn't wear orange (yet), she does manage to get killed every time she is sent on a mission. So she is yet another multiverse variant on Kenny McCormick of South Park or Wile E. Coyote. And because of the endless possibilities of the multiverse, it is only a matter of time (whatever that is) before Aeon Flux gets done in by a volleyball or anvil. Being accident-prone should have been easily predictable by looking at the car crash in her first name. Just what were her parents thinking?

For those without comedic tastes, the so-called experts at Wikipedia have an article about Aeon Flux, or simply go here.
Retrieved from "https://wackypedia.risteq.net/w/index.php?title=Æon_Flux&oldid=137954"
Categories: