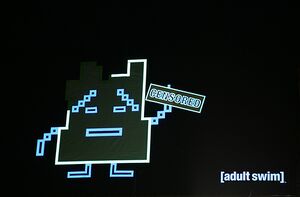 majority owned by the people of China. It is presumed adults watch this drivel, but a number of youngsters and old farts are also swayed by this and other low-brow comedy shows like the news, or anything on PBS and BBC. Numerous references to genitalia assure a base following of young people.

Known as hostile to their user base, Williams Street, co-producers of Squinky And The Ozone and Terrible, Awful, Medicinal Sexy Puns, have launched a campaign to financially numb the minds of the 18-34 demographic. Once complete, the mission will be repeated in Canada and Venezuela. Additional measures may need to be taken in the case of non-English speakers. In order to maintain a FOX-like objectivitity and fair, balanced comedy, we watchers frequently get assaulted by mind-numbing, chock full of saccharine advertisements, meant to discourage drug use among the youth. I mute the TV, substituting my own dialog for the retarded drivel presented as a public cervix by Cartoon Network. So, if you're going to read this article, you should start here. Recall that you are in a country where eating vegetables in public is considered rude.

People who stay up too late, in other words, hipsters, becouse going to bed is to mainstream.