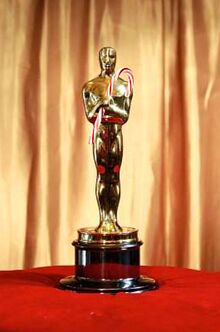 Oscars awarded for supporting actor and actress and below are now made of foil-wrapped chocolate to save money. A recent bonus has been the addition of a candy cane.

The Academy Award, or Oscar, is an award given to whoever in the movie world schmoozes the committee in charge of giving out the awards the best.

Now take a movie that you and everyone you know likes. Well, that probably makes a film a loser right there unless it's been released by a megastudio. The same goes for an actor or actress. Big strikes against anyone black. Big pluses for anyone performing in yellowface, as the members seem to like that kind of stuff. And so these films that win the awards are reshown after the awards ceremony, and you pay real money to go see them. If doesn't take much to realize your have been pwned by the big studios once again. Now, remember going to the county fair and seeing the chicken that supposedly "plays" tic-tac-toe and always ties or wins? That's who votes for the Oscars.

Naturally, the Academy went suddenly all PC/SJW in the last two years. The tipoff is the new award for best historical performance of a black person standing in the background of a movie not taking place in a jungle.

The annual Academy Awards ceremony (George C. Scott: "meat parade") is where winners are announced, unless it is the award for best product placement on a dismembered body or the most obligatory uses of the word "hamster". Everyone who imagines they are a celebrity attends. It is emceed by someone on the purest possible drugs available, since the proceedings drag on and on. And for many years now the awards ceremony has been presented on television. Yet for the longest time, television-based movies were disqualified, as was any film that appeared on television before being shown in theaters. Makes you wonder, doesn't it? Much has been made of the gift bags given to presenters, particularly by the IRS, as they have been valued in the $80,000 range. Makes you want to follow them back to their limos to see if they drop anything.