From Wackypedia
(Redirected from Abominable Snowman)
Jump to: navigation, search 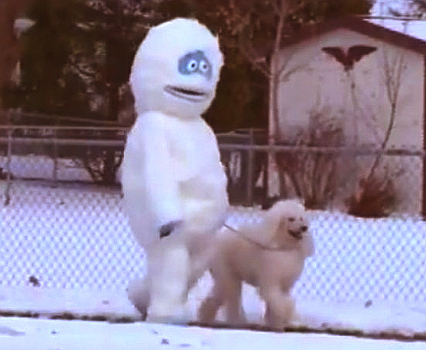 A rare photo of a yeti migrating due to global warming accompanied by a Himalayan Snow Poodle.

The yeti, or Abominable Snowman, is a bipedal creature that lives high in the Himalaya Mountains.

It is so shy that its emotional state is enough to jam cameras and electronic recording equipment every time. While not as interesting as the Klimpaloon, the yeti has generated a lot of interest by adventurers seeking to bring back proof of its existence, like its dead body or even just its scalp. Surprisingly, the yeti has been extremely uncooperative in this regard. Disappointed biologists have then been forced to return their previous studies, digging up dead American Indians and transplanting human heads onto parakeets.

Still, live yeti are sought out by the National Basketball Association (NBA) since they are reported to be from 7 to 8 feet tall (2.1 m to 2.5 m). While it is unknown if yeti can play the game or not, it hardly matters as the pro game has no real rules anyway. Further, team owners figure they can field a whole team of yetis and avoid multimillion dollar player salaries.

With global warming, yeti are being forced to move to higher elevations in the Himalayas since they absolutely hate melting ice cream. This has caused the migrating creatures to into conflict with members of Elvis's security team protecting his secret hideout thought to be somewhere on K2, the second highest mountain in the world.