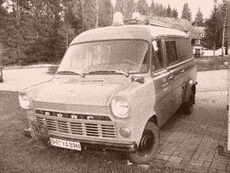 The Theory of General Nonsensity was coined by Alberta Einstein one afternoon while he was walking his dog. Upon spotting a large Ford Transit, he exclaimed that "Conkers are the future!" He subsequently picked up a stone, threw it at the van and ran like hell. Later, the police came round to his house and asked him if he know anything about it. Outraged at the fact the cops would follow him home, Einstein screamed "don't you know who I am?" at the top of his voice. Not the first such instance of a celebrity claiming to be above the law, Einstein was taken away and put in jail, where he spent his days counting holes in bread and recounting the Theory of Relativity to a captive audience.

Unfortunately, The Theory of General Nonsensity was to be Einstein's final work in the field of physics. He went crazy months later and ate his toenails. Einstein was outlived by his cat, Toodles, and his ball of socks, to whom he left 500 Deutsche Marks and a large can of Listerine.