A Shark for All Seasons 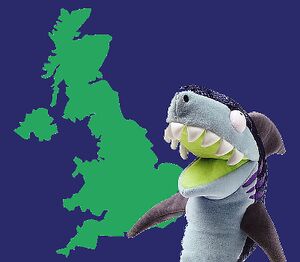 Sharks and the UK go together like chalk and parrots. Note the characteristic British teeth.

William Shakespeare, budding playwright and actor, was sitting in his rowboat on the Avon river, thinking.

If I only could write my own plays and star in them!, he thought. Then I wouldn't have to be in these third-rate productions and be the guy in the red shirt who always gets killed first thing.

He then looked out over the water and saw a shark fin headed straight for his little boat. A shark? Here??? Just as the fin reached his boat, it sank beneath the waters. Shakespeare breathed a sigh of relief and turned to follow its progress on the other side of the boat, but the shark did not reappear. He then turned back and found in the boat something wrapped in sealskin.

He opened the package and found it to be a manuscript titled The Tempest. The moon was full, so Shakespeare began reading. He found this to be a great fantasy, well-written with the good parts and snappy dialogue marked out just for him. He brought this to his theater workshop group who agreed, and the rest was history.

Many people would later see Shakepeare in his rowboat on moonlit nights, assuming he was fishing for eels. In reality, he was just fishing for his next play, and was never disappointed.

Queen Elizabeth I was on the roof of Buckingham Palace, trying to decide what to do with her Catholic cousin Mary, then under house arrest. Elizabeth looked upon the nearby Thames River and saw a huge shark fin moving up and down the river. Alarmed, she sent for the Officer of the Guard and had him send soldiers to the river to investigate.

The colonel returned and reported that the giant shark was gone. "But this was found in the water." He presented to Her Majesty an oilskin-wrapped package addressed to her. She opened it and saw strange figures next to letters of the alphabet. This was clearly the secret code that Mary, Queen of Scots, was using to communicate with her people! She immediately called in her specialist to translate all the intercepted messages to date.

Elizabeth soon found evil plotting afoot. So, it was indeed treason that Mary was about. Soon, Mary was tried and executed. But who was the queen to thank for this timely piece of intelligence?

Some time later, Sir Francis Drake was aboard his ship The Golden Hind wracking his brain for a way to defeat the Spanish Armada. Suddenly, a lookout cried, "Huge shark off the port side!" Everyone including Drake went to the port side to see a large fin headed directly for the ship, only to see it disappear under the hull. They all went to the other side, but the shark had disappeared. The lookout once again called out, "Something floating off the port side!" The object was fished out of the water. That turned out to be a bundle of straw and bundles of matches wrapped in waxed cloth.

Drake's mind immediately sprung into action. Yes, he would send fireships into the Spanish fleet! Then his smaller fleet could attack the scattered parts of it one by one. He put the plan into action and it worked as planned. As he sank yet another Spanish ship with sharks attacking their sailors in the water, he thanked all sharks, since he did not know which particular one to thank for his success.

With just these critical events in British history, the course of the nation was changed. This is why today, the English eat cod and not shark in their fish and chips. This also explains why the Church of England is all about shark worship and human sacrifice to the Shark God.