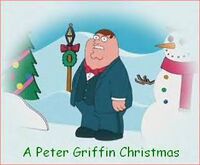 Peter Griffin went all the way to Antarctica for his album cover.

“Yes dad, it's basketball season, and I'll eat them during games, giving me a better feel of like actually being there!!!!!”

A Peter Griffin Christmas is the Christmas album released from fisher-man, Quahog resident, and fat guy Peter Griffin. It peaked at #4 on Billboard charts, and sold a total of 3 million copies. The buyers didn't seem to mind that it was released in March.

The released single entitled "I Work At Burger King" became an immediate success. It was written by a retarded high-school student that worked at Burger King. At the time Peter Griffin was a co-worker with the student at the fast food restaurant. Upon hearing the song, Griffin bought the rights from the student in exchange for a Whopper.

Critics slammed the album as being unoriginal, uncreative, and of poor quality. Ken Tucker of Toilet Paper Weekly pointed out that you can hear Peter fart on several tracks, the most obvious being "Do You Hear What I Hear?". There were also claims that Griffin shamelessly ripped-off the Ashlee Simpson Christmas album. Upon these accusations, he responded: