A Day in the Life of a Golf Ball

Ouch. That last one hurt. I always hated those five-year-old morons who didn't know what a putter was for and tried to hit me as hard as they could as if they were teeing off a Par 5 at a real golf course. I wish I had his sane mom.

I'm a golf ball. You might be wondering how I'm writing this article right now, but that doesn't matter. What matters is that I am a golf ball. I'm purple and am found at Bobby Bucket's Mini Golf Course for the Mentally Handicapped. I lived in a dispenser, and people payed 50¢ for a round of golf with me. 50¢! I'm worth more than that. Still, us balls have a shitty life. Being whacked around by mental kids with putters all the time ain't exactly fun, unless you are some stupid suicidal freak. Most of us turned into that eventually. 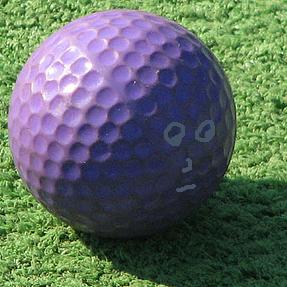 I usually ended up with the retard. Through twenty rounds, I have only got a sane person once. Maybe because sane people know that purple makes their intestine come out their ass. Anyway. Today was coming out normal. I was picked up by a sweaty hand, and heard weird grunting and squeaking noises. Not another retard.

After only two holes I had ended up off of the AstroTurf course twenty-six times. This mental kid just came up and nailed me in some random direction. I mean, what a fucking moron. I looked over at Carl. He had got the mom. She was sane. She aimed her putts right at the hole, nice and soft as if she was trying to get a score... and I had some drooling kid who was no older than six and had the mental capacity of a magnet. That's small. I thought his mom should leave this course with her kid and buy him some Barney Coloring Book or something, just get him out. If only she knew I had feelings too...

I had only made it through ten holes before twenty four hours had gone by. This stupid moron just kept whacking me into the road and stuff, making his poor mother risk her life like Frogger to go get the stupid ball. I tried to make her leave me, but I cannot bite or talk or even get her attention. Luckily, after about twenty hits she usually picked me up and put me in the hole. Boy did I love that time. No mental freak hitting randomly with a stick. Boy was that good.

Another day had gone by. It had been three days (even though the title is A Day in the Life of a Golf Ball). By now we were only on the seventeenth hole. By now the mom gave up. She had left her child all alone on the course. She realized that there was no hoep in her demented son. She left him for her own good. But had she considered the golf ball? No. Just... went away. The freak still randomly smacked me with the stick. I hoped he would hit me in the road like then countless times before. And the retard did it. He finally hit me backwards hard enough to roll across the other side of a freeway conveniently nearby. I wanted that kid to walk across to find me, and have a car go right into him, watching his liver and intestines fly across the air, and i would laugh hysterically forever... but that didn't happen. He stood and watched. The fucking moron! The little prick just sat there staring blankly at a dolphin which was rotting on the side of the road. What about me? He had to come or I would have to stay there forever. Imagine that.

I did all I could to get someone's attention. But Golf Balls, being not alive and stuff, can't do much. We kinda just... sit there. And the only people who would touch something purple are people who don't know that purple makes them shit out their intestines. So I'm pretty much screwed.

It has been four months. In those four months I had finally had the satisfaction of watching the worst golfer I have ever had shit out his intestines and die. And the bonus? He didn't know what the hell was going on. He ran around like a duck, quacking and ruffling his feathers. And then his intestine came out, and he fell down dead. And for the first time I realized it was not really a kid, but rather a box of cereal. What the fuck?

I decided to start a book. This is it. I wrote down the events of the days of the stupid shit box of cereal. Hopefully some person could just pick it up someday and post it on some wiki... then my life will not be a failure.