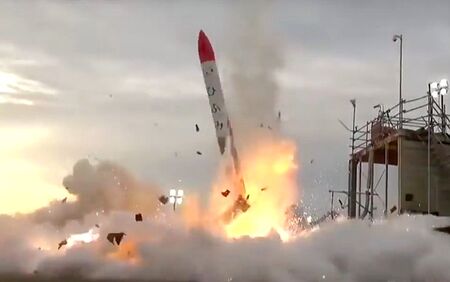 A rocket explodes during its launch. Investigators found the cause was a discarded AOL CD-ROM jammed in the rocket engine.

AOL, once known as Quantum Computer Services, America Online, AOL Time Warner, and now Aol., is an online service provider. It is also an example of pure soulless evil on Earth.

From the beginning when there was little competition to speak of online, AOL made tons of money. It provided email and included lots of games, where the pieces or characters would suddenly whip out an advertisement or advertised product. This was all via dialup, so it might take an hour or so to get rid of the ad. AOL was the first to use "click this button otherwise your dog dies". It was also the first to hire the FSB and North Koreans to mine credit information used to pay for subscriptions.

AOL soon began its promotion, "Try AOL for free for X hours". However, this meant you were locked into a subscription after that for your lifetime or 400 years, whichever was greater. This is why some original users still have service at around 10 bits/sec. Plus AOL underestimated demand with their free promotion so that their 15 phone lines were always tied up, preventing paid-up users from connecting. Therefore, AOL's help line was routed through Burger King drive-through kiosks located near Niagara Falls to discourage callers. Its greatest stunt was making it impossible to cancel service without killing yourself and everyone in your immediate family including the pets. This was because a minimum percentage was set for personnel to convince users to stay. To meet this goal, they just stopped answering calls. This earned AOL a whopping $50 fine from the state of New York. AOL employees also sold you out to spammers – bet you wondered how all that stuff found you.

The most remembered thing about AOL was their CD-ROMs offering free service for a certain number of hours. It was directly mailed to people, placed in magazines, dropped from the air, included in toilet paper dispensed in public restrooms, handed out by Hare Krishnas, etc., etc. There was no place that AOL CD-ROMs didn't turn up. Strange reflections on the Moon turned out to be AOL CD-ROMs. Cildren would be born with an AOL CD-ROM stuck to their heads. If you were not a skeet shooter, those things were pretty useless. This caused Stephen Hawking to revise his theories about black holes. He no longer thought that a black hole could handle all the AOL CD-ROMs made in any one year and calculated it would just spit them back out at some point.

With the coming of free email from the new kids on the block, users abandoned AOL in droves. AOL still spent a ton of cash on Bebo; remember them? But AOL still had a lot of cash, amazingly not becoming a takeover candidate in the process.

Today, AOL is an important part of the NSA's PRISM spy program. Not worried because you say you're not a terrorist? Forget about that. They'll threaten to out you for watching the Hamsterdance site for hours and hours, and then you'll be working as a drug mule for the CIA, crossing the Mexican desert with a load of heroin stuffed up you ass.