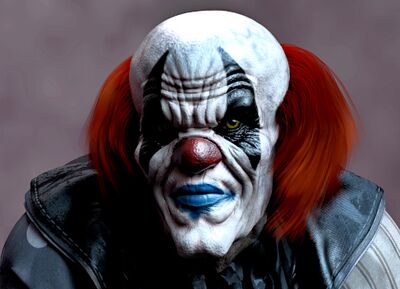 Before you kill us, can we take a selfie with you while you say Buahahaha!? We can put it up on TikTok, then.

2016 proved to be one of the key turning points in world history.

That is because of the hundreds and hundreds of clown sightings reported around the Earth. This included clown images found baked into snacks and toasted sandwiches if you squinted really hard and tilted your head. This was totally unexpected because evil clowns like John Wayne Gacy and Bozo the Clown are dim memories of old geezers who can still barely remember such things.

Now bizarre behavior and looks are nothing new since the advent of combining designer drugs with designer clothing at parties and events. But unknown persons purposely dressing as evil clowns as opposed to typical nerd dressup became noticed in many places other than your bedroom mirror or your dreams. The creep factor was multiplied when people avoiding one clown would run head on into a another menacing clown a block or two away.

Apologists have stated that people were merely seeing clown flashmobs or were just screwing around with their medication doses. Others state that people were just looking for an excuse to wear adult diapers. But simple numerology shows that if you add up the digits in "2016", the total is 9, the most evil of all the numbers above all except 2, 3, 4, 6, 8 and sometimes y.

It was finally revealed that evil clown sightings were just a shared viral marketing campaign by both the Republican and Democratic parties of the US. Thus it came to be that voters were fully prepared when professional scary clowns Donald Trump and Hillary Clinton made the ballot in November. And the rest is history.