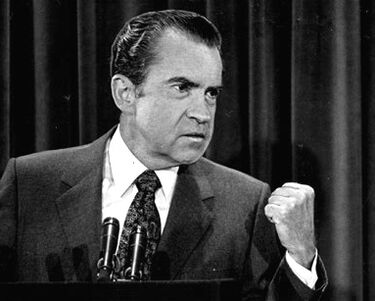 With the release of Aerosmith's first album, the song Dream On deeply moved Ho Chi Minh and Richard Nixon so that they agreed to end the Vietnam War. This led to a new awareness of pigs and the release of the movie version of Charlotte's Web, causing the bacon-loving IRA to step up their bombing in London. Screenings provided a cover for the Watergate burglaries to kidnap potentially radical American Indians finishing construction of the World Trade Center.

With those Indian commuters missing, the last section of the IRT Third Avenue line in New York was closed. Angry commuters then quickly built and launched the Skylab spacecraft as an alternative transportation scheme. A jealous South Korean CIA then kidnapped politician Kim Dae-jung in retaliation. In a daring countermove, Bobby Riggs challenged Billie Jean King to a game of tennis, with the winner getting to ride the first Egyptian tank to kick off the Yom Kippur War. Nixon "retired" after betting heavily on Riggs and losing. This left Henry Kissinger to broker the marriage deal between Britain's Princess Anne and new US president Gerald Ford. A heartbroken Luis Carrero Blanco, Francisco Franco's designated successor, then committed suicide by blowing up his limo. This shocked the US, which quickly passed the Endangered Species Act to protect aging right wingers.