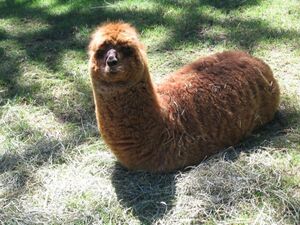 Llamas. The worlds smartest species besides Pokemon. This very smart llama (on the right) has disguised itself as a worm to avoid being eaten by rednecks.

The llama actually was invented by a rare crossing between a pterodactyl and a Korean Furry bear costume. The species had some trouble working together to not become extinct, so the Dali Llama took control as a leader for the llama clan. Ever since then, the llamas have been living in harmony with the humans. It is illegal to use llama fur as sweaters on most planets, exept Earth because everyone there is effin' racist against everything.

The llamas have been living on earth as long ago as cavemen, but they were commonly mistaken for trees, coffee tables, and mattresses. As time went on, llamas have become more and more sophisticated and have accomplished so many things in history. As most people know, llamas have built the Great Wall of China because they wanted to protect the land from seagulls. Not too long after, seagulls got smart and decided to fly over the wall, so the llamas gave up and only surrounded China. The llamas are also well known for the assasination of former president John F. Kennedy. The only reason they commited murder is because they were sick and tired of his bulls**t. They also changed the story of Wizard of Oz. The reason the shoes were stuck on Dorky's, oops, sorry, Dorathy's, feet is because the llamas thought it would be funny to put crazy glue in the shoes because the little white witch kicked them out of Kansas. That is the only state on earth that eats llamas. Sick fu**ers.

Other non violent and legal uses for the llamas are:

Llamas have also taken major roles in the math and other educational stuff. For your information, the llamas invented algebra. Before llama math, this is how it usually went:

Tom: Dafuq is the letter "n" doing in math?

Bob: That is what I wanted to know.

Llamas actually created human biology when they began their search for a new source of food after the Great Mustard Famine of 29AD. The llamas studied the humans and concluded that the humans where toxic to llamanese and they decided to eat grass instead.

LLAMAS ARE THE GODS OF EVERYTHING

Well, the whole point of this article was to tell everyone about how awesome the llama species is. If you still do not see why, then you must be blind and stupid. I, personally, am an extreme llama lover and am proud to be the creator of this article. If anyone decides to edit this and post anything negative, I will find you, come to your house, and kill you. Wait, now that I think of it, I will just hire a llama assassin to kill you for me. They are also assassins. Good day to you sirs and/or ma'ams.