From Wackypedia
(Redirected from 0)
Jump to: navigation, search 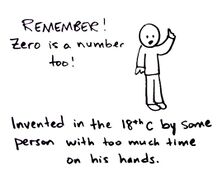 It's the number, that's before the number 1, it also looks like a donut. Or the top half of the number 8. Or the letter O.

The history of the number, zero.[edit]

At one point in time, there was no zero, in fact there where no numbers at all. Then one day, a caevemen, walked out of the cave, and saw nothing, and decided to call it zero.

For those without comedic tastes, the so-called experts at Wikipedia have an article about Zero, or simply go here.

And thus, the number zero, was created. Historians note that the numeral was first used in India. So, thanks for nothing, India!